“There’ll be nothing to trouble you up there
” said the Meteorologist I rang through my work contacts. I was a little dubious about the wind , but waiting to do the SK was ruining my holiday and I had a ride with Dave Allen to the start. So I went for it……

I started at 0330 am 30 mins after Dave. Very humid to Herapai hut where I filled up with water. I could hear a strong wind blowing but stars were visible so I was hopeful. Once out of the bush line though, rogue gusts caught me , I’m guessing 30 gusting 45 kts wind.
Lovely sunrise at East Peak and beautiful pink cloud at West Peak. Sweet white daisies everywhere.

Pukemoremore was windy and in cloud visibility about 20 metres.
Coming down Logan I went off track in the murk and because I love leatherwood I cut across a spur back onto the ridge. 5 minutes lost.
No problems getting to Dundas 0817. From the peak I followed the 185 bearing I’d put on Viewranger and then made error no 1 . I ran. The visibility was very bad and I had not been here before. Running quickly took me off the bearing. Where I made error no 2. I wasn’t keen to climb back to ridge so I followed a parallel bearing sidling 2 contour lines below the ridge. This was ok for a while but I was soon reunited with my beloved leatherwood and even more loved spaniard grass! Small bluffs and rocks blocked my climb back to the ridge. Eventually I climbed a wet rock face with sore hands from grabbing foliage. Reached into my pocket to check gps. Gone!. Fuck x 3!
I retraced my steps , but this was difficult in crap vis, wind and drizzle . Wasn’t quite sure where I had come from.(Even though I’m a huge fan of LW one bush looks pretty much like another…..) 10 metres later there it was, poking out of a leatherwood. Thank you Lord I’ve found religion!!!I soon gained the ridge , jumped onto the track right in front of Paul and Marta, said “hi” then they disappeared behind me in mist. 50ish minutes wasted . I gave up on being in the ultra cool sub 24 hour club and consoled myself.
I was definitely in the ‘Dumbass at Dundas’ club . ( Hi there Pidcock and Swallow!)Arete 0955 weather shit. Pukematawai , a couple of bemused  Te Araroa walkers. Beautiful twisted trees with green coats. Dracophyllm hut. I’m embarrassed to say I circled this twice looking for the track duh. Seemed to take a long time to reach Nichols hut,  1304 but made up some awesome stories for my first DAD club meeting weather no worries under cover.

It was a pleasant surprise  to see Mark Hearfield at Andersons hut. 1423. Paul Helm sans Marta caught me up there but I was gone in 30 secs Bam!
The weather deteriorated.. It became colder, Gale force winds and rain Standing up was difficult in parts let alone running. I was happy enough but wondered whether I would need to pull the pin at Kime ( more for my husbands concern than mine ) I reached Maungahuka hut.1715. Shortly after, Paul arrived . He was cold and hungry. We decided he would follow me for safety due to the weather.
Happily the wind abated slightly but the low visibility and cloud continued. Paul was keeping pace and he knew the route very well so I wasn’t worried about him. Loved the ladder, ropes, drop offs , exciting stuff in the wind!
Just prior to the sign for Kime and Fields hut I heard Marta talking . I could vaguely see in the mist that they had caught up to Paul.
I took the short cut over Bull Mound to Kime 2009.
Surprise , surprise! Pawel and Chris were there, Pawel offered me a cappuccino. I hesitated , would this be the end of my unsupported status? Stuff it , yes please!
I put on an extra long sleeved top and my overtrou, poured the coffee into my latte flavoured perpetuem ( double joy!)
I was almost out the door when Paul turned up alone. What the? “Where’s Marta and Mark”? ” I haven’t seen them” he said. I could have sworn I saw and heard them. Sorry I left you Paul!
Leaving Kime 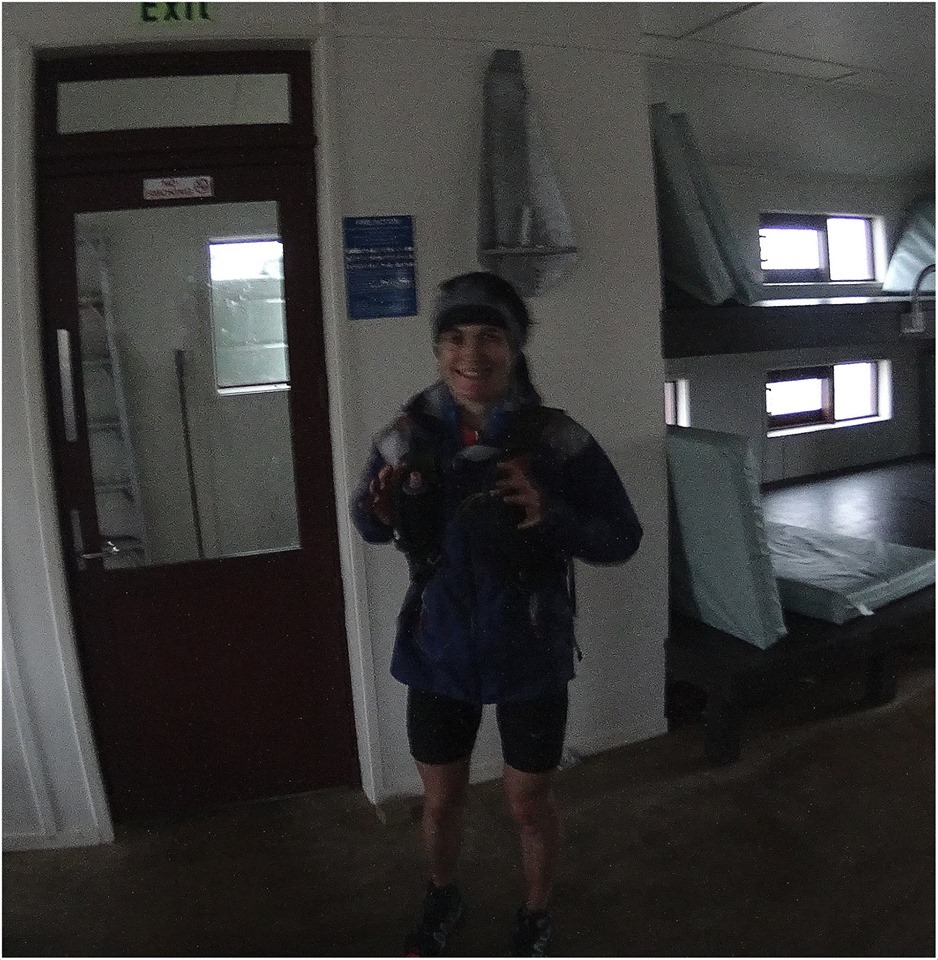 Gale force winds and rain continued from Hector. Happily this became a tail wind so the Southern crossing was awesome. As I approached Alpha the full moon appeared. Yep, this is what I signed up for. I reached Alpha hut 2232. Holy shit!  maybe there is a chance, maybe I can be cool!I didn’t know what support Paul and Marta had so neat to see Ash and Al at The hut. Ash informed me it would take 4 -430 to Kaitoki. I informed him it would take 330 hrs.
It took about 2 million hours.
I love the things you see in the dark . Wetas, flat worms, spiders ( not so much),Laurence and Tim! , they gave me some batteries . I had six spares but I was still worried….
Finally Kaitoki 0312 am . 23hours 42 mins BOOM.
Wow what an adventure.

Viewranger/Iph6s plus extra battery *****
(Map and compass too of course)

Special thanks goes to SPOT and their maps as they allowed friends and family to follow my progress along the Tararua range a  great asset for SK attempts.